Darrée is currently working on a satirical webseries about a biracial teenager living in a dystopian world. Called Homework, the series explores gender and racial inequality as it indicts systems that put profit over people. Commotion recently sat down with her to discuss her journey from L.A. to Baltimore, the themes that run through her work and the ways in which MICA has influenced her as a filmmaker. 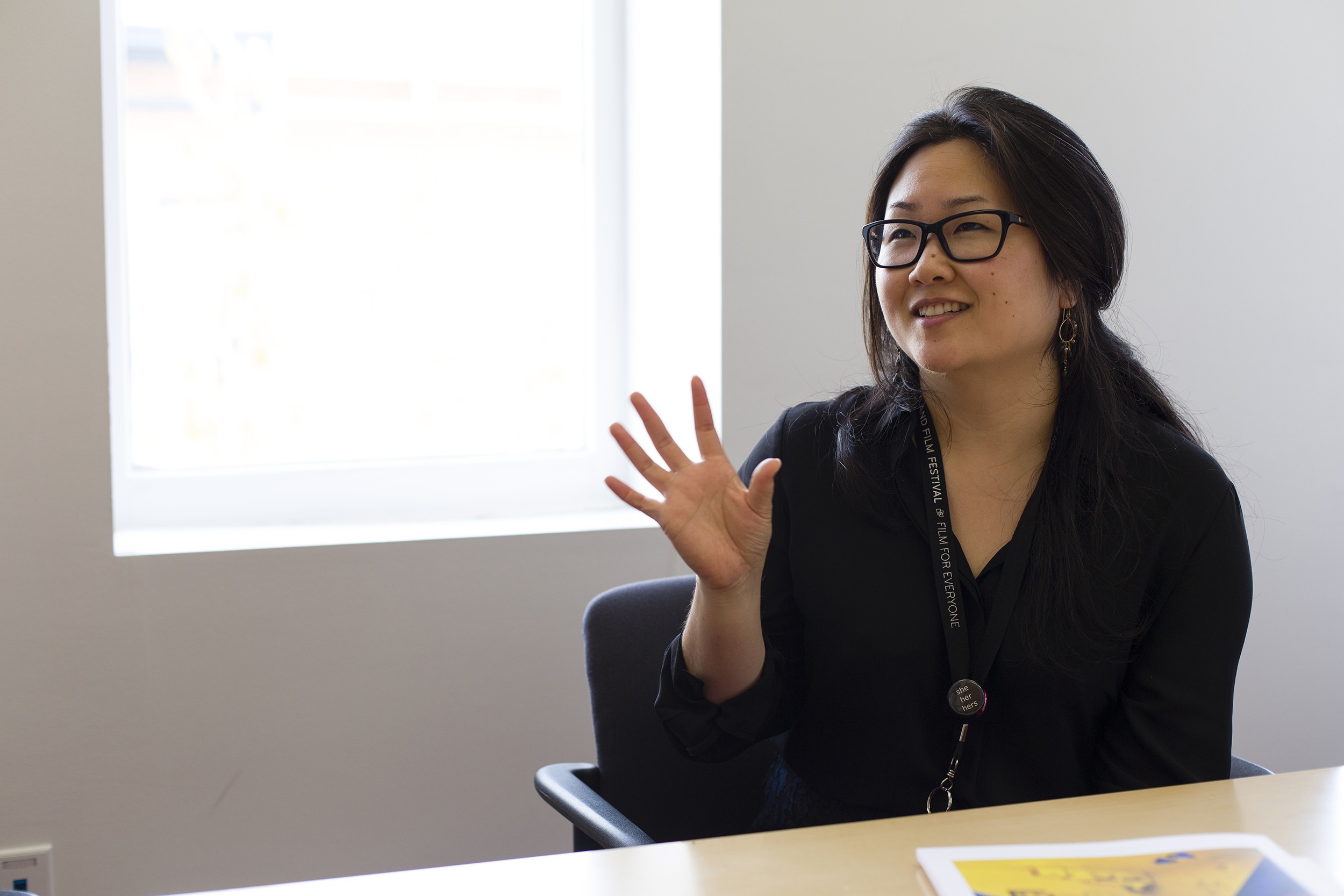 Commotion The first and obvious question is  — as a native of Los Angeles — why did you decide to go to MICA to study Filmmaking?

Darrée It’s really ironic, because when you’re living in L.A., as a kid, you’re focused on things outside of film. I understood in theory that L.A. was this huge hub for film, but it wasn’t until I graduated from high school, until I graduated from college, until I went to South Korea that I realized, “Okay, I know a lot of people in film.”

So I went around the world, from L.A. to Santa Cruz to South Korea to San Francisco, back to South Korea, and then to Hawaii. And I realized that I wanted to study film. My husband works for the government, so we looked for a place to go where he could work and I could study, and Baltimore allowed that.

I’ve always struggled with feeling like I belonged somewhere. But when I got here, I realized I’ve never felt more at home. There’s a really great balance of activism, of creativity, of intellectualism and of really great interactions with strangers. I’ve never lived in a place where people will say, ‘Hey, how are you doing?’ just on the street. People in Baltimore are really
interested just in your presence.

COYou have a background in writing, photography and performance. What led to your interest in filmmaking?

DH Ultimately, I found myself really interested in complex concepts like identity and the socioeconomic disadvantages that many immigrants or marginalized people face. I love writing but it wasn’t enough to express everything I want to say. I’d been interested in photography and performance and music, and I really enjoy working with people. But it wasn’t until I started interviewing people I’d grown up admiring that I realized I enjoyed talking to people about their stories and wanted to do that through film.

COWere you interviewing people for a journalism project?

DH My creative partner and I, in 2014, were in this kind of millennial funk. We realized that we had spent our lives following this carrot — that if you do well in school, you’ll get good grades, and if you get good grades, you’ll get a good job, and if you get a good job, and so on. We were following this conventional road to success, and we knew people who didn’t follow this one path and were doing things that made them really happy. So we pulled a list of 22 people together and interviewed them. I realized what I was doing could translate to filmmaking.

Still from the web series Homework

CO How do you think making films in Baltimore had affected how you approach making films?

DH My approach to filmmaking is a question of how to take an issue that’s really important to me and share that message or vision with as many people as I can. Film is something that everybody watches. If you scroll through Facebook, every single post has either a video or image attached. It’s a really efficient medium.

So I think L.A., for example, is very much about how to maximize a story for commercial value. Filmmaking in Baltimore, for me, is about how to take an issue that’s truly important to a community and reach the masses in a medium that speaks to them.

CO Can you tell us about your web series, Homework?

DH Homework’s protagonist is half Asian, half black. Her teacher is white and in the first episode, he wants to not give her the grade that she deserves on a test. But Homework’s not one dimensional in that it’s just about race. The teacher is also in a larger system that is preventing him from doing the right thing. In the next episodes, we start to uncover the deeper government conspiracy that’s happening in this world and the weird things that politicians and bureaucrats do to push their agendas to make sure that capitalism works but at the expense of morality. 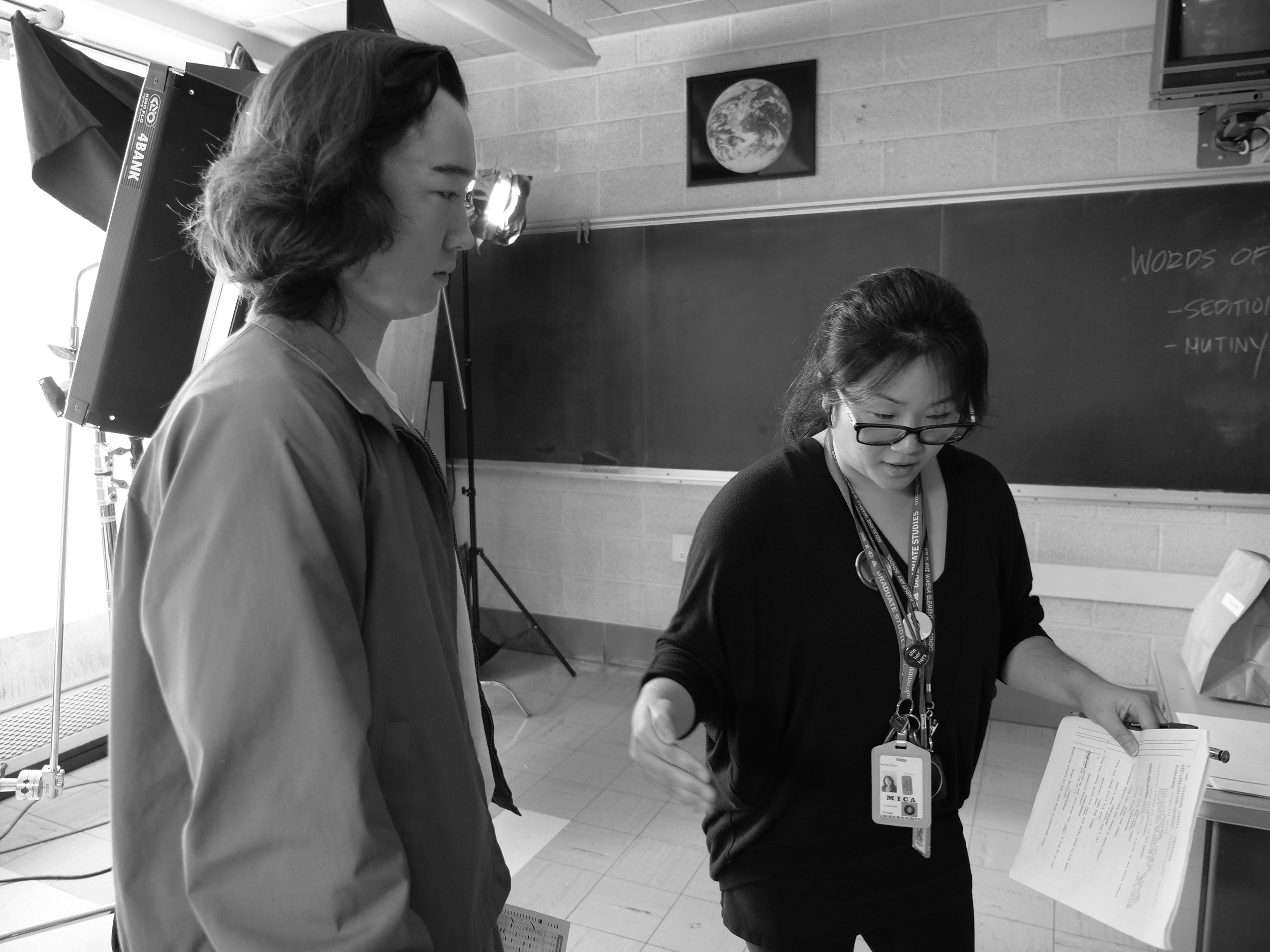 Darrée behind the scenes on the web series Homework

CO You explore your own identity quite a bit in your work. As a filmmaker, how do you see the world and your place in it?

DHIn Korean culture, as a female, I was taught to be polite and sweet and engage in all the appropriate pleasantries. For a long time, I believed that being opinionated was a bad thing. Coming to Baltimore and coming to MICA and realizing that so many people are talking about difficult things gave me the permission to look inside and say, “Hey, I can say these things, too. I’m starting to assert and believe that my perspective is different and should still be expressed.”

CO Were there any mentors here at MICA that have impacted your work?

DH Kirsten Hollander, faculty in the Filmmaking program, has been MICA mom to a lot of us. It was a combination of her expertise and experience in filmmaking combined with her experience in teaching. That coupled with all of us coming from a variety of places and backgrounds and experience levels in understanding film, she was able to meet us where we were and make sure we got where we wanted to go — and also where we needed to go.

I also took Design Theory and Practice, which was taught by Brockett Horne and Sandra Maxa with Ellen Lupton’s support. That class was so helpful in understanding that anything can be designed. I began seeing my project as design: how do I want my society to be designed? How do I want my production set to be designed? How do I want to design my budget so that I don’t exceed what I have? It was very much in the back of my mind, that question of how do I design something. Design is all about putting a structure in place.

Also, once you realize how valuable the input is from people who are outside of your department or your focus, that’s when you really start to blossom. That’s when you see how
your thinking can actually benefit your target audience or even beyond that audience.

CO How will you define success for yourself as a fimmaker?

DH I want to help people who are like me, people who grew up in an immigrant family and were told that the definition of success is going to an Ivy League school and having a perfect SAT score, right? They have so much more to offer than to be an excellent sheep.

We’ve come to this place of telling people what to do, of dangling that carrot in front of them and saying ‘this is what you need to do to be a successful person.’ How do we get away from that? How do we actually say, you have so much to offer. You’re here for a reason, and what is that reason? I’m really driven by that, and I want to use film to add to the conversation about what it means to live a meaningful life.