It seems like such a clear solution to reducing recidivism rates prevalent in the criminal justice system: create an easy-to-use SMS text tool that allows case managers to remind clients about upcoming court and treatment appointments. The more people under court-ordered supervision follow guidelines, the lower the rate at which they’ll be re-arrested.

Yet so many things coalesce to obscure the obvious. Organizations operate in silos instead of sharing information across departments. There’s the assumption that people forget or don’t care about appointments rather than taking into account the emotional, social, financial and logistical barriers they face. Or the fact that systematic and budgetary restrictions can mean that case managers share a single cell phone — or use work phones that can’t send or receive texts at all.

So re-arrest rates remain high — data show that 60 percent of jail inmates have prior sentences to probation and 58 percent have sentences prior to incarceration — and people remain stuck in a highly punitive cycle that is expensive and does nothing to address the reason behind the original arrest. Tackling the problem is a daunting task. 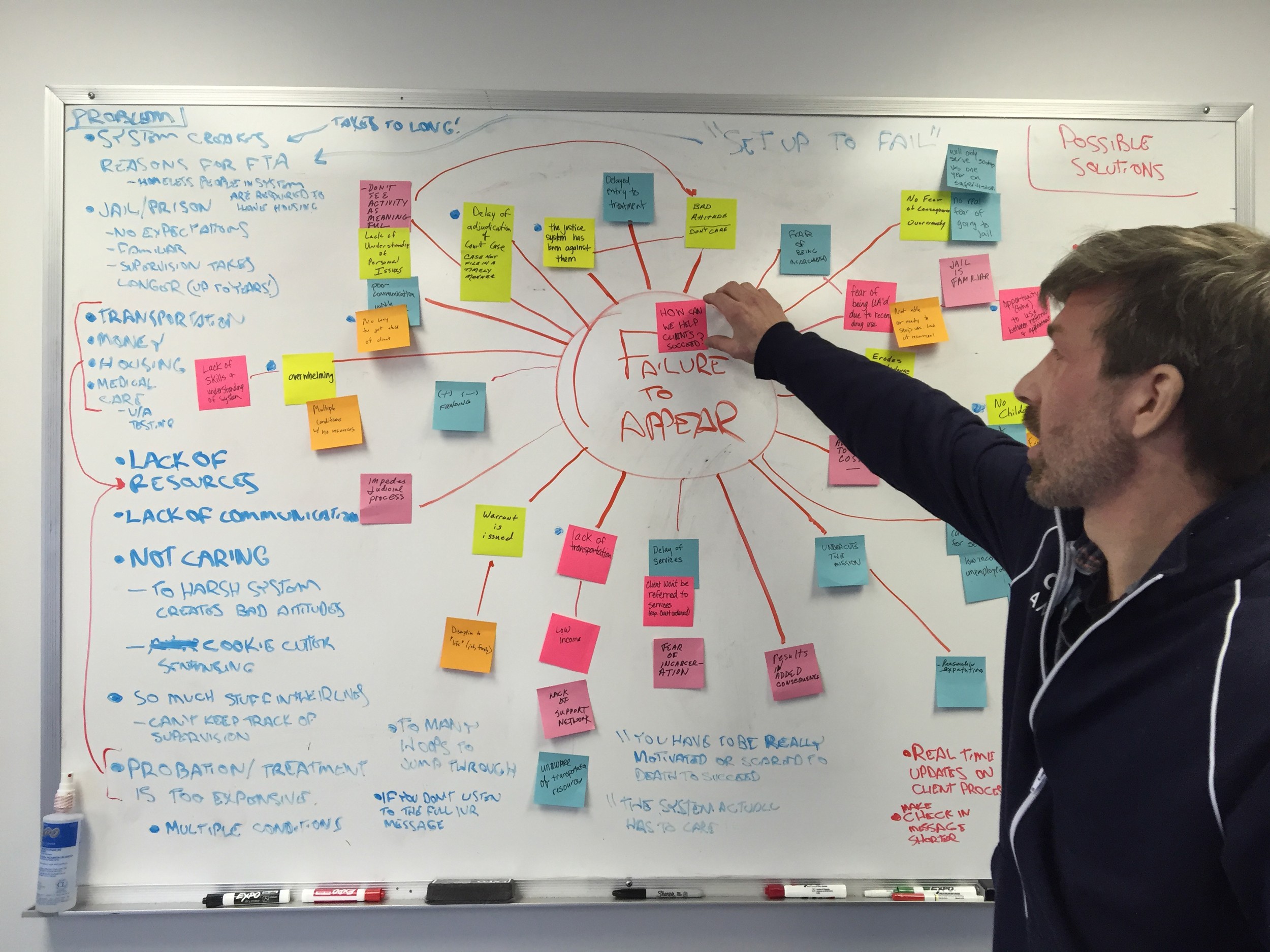 Salt Lake County (SLC) in Utah, however, decided to do just that, and they did so by teaming on a year-long project with Code for America, a nonprofit that helps governments across the U.S. use technology and design to deliver more efficient services. And Code for America, whose work is rooted in the same user-centered design philosophy that is at the heart of MICA’s M.A. in Social Design program, sent a two-man team to SLC that included social design alumnus Ben Peterson ’12.

Working on the SLC project as a 2016 Code for America Fellow, Peterson and his partner, software engineer Kuan Butts, incorporated user-centered, design-thinking techniques to create that simple texting solution. 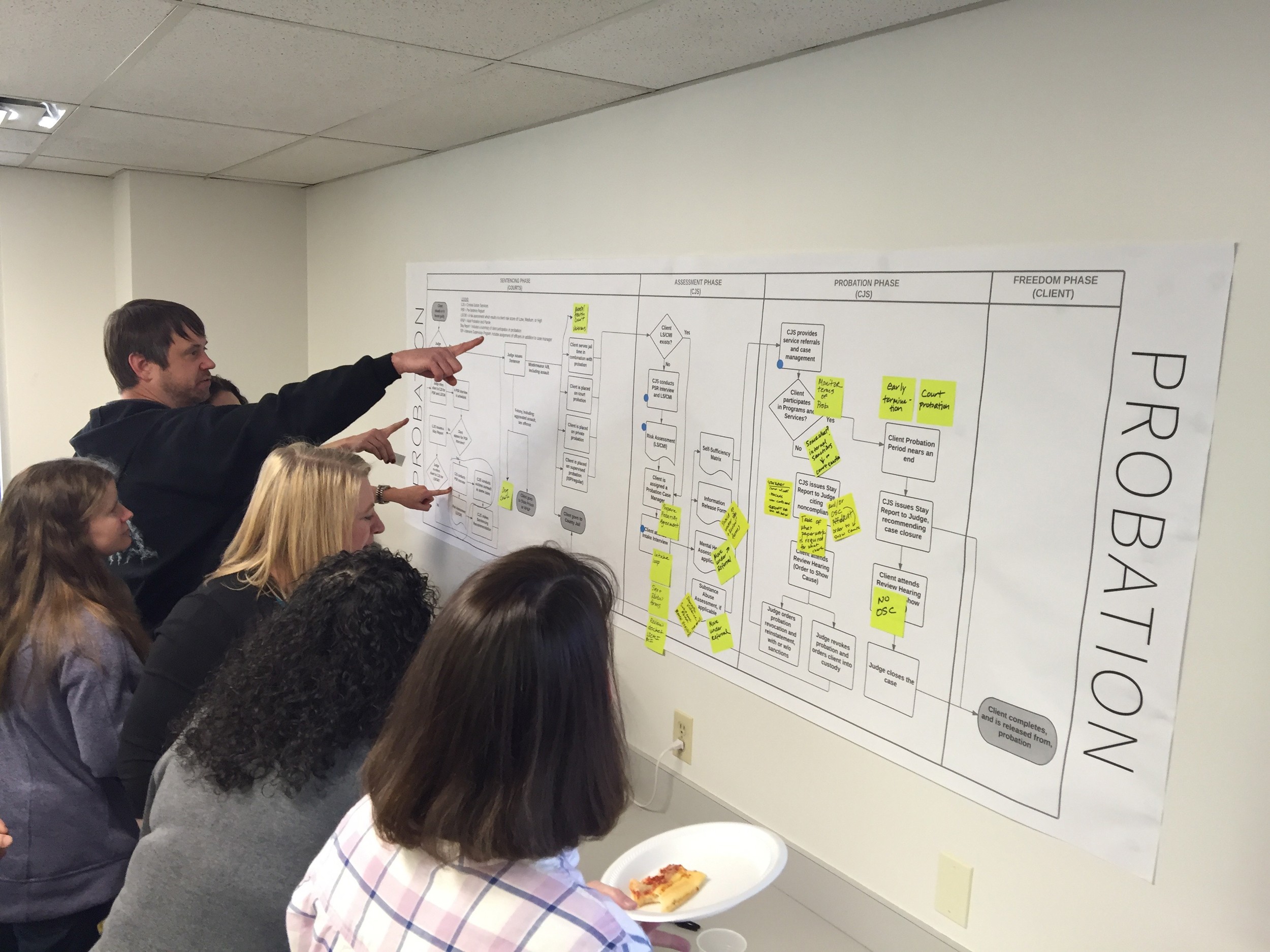 Called ClientComm, it is not only changing the way case managers in SLC operate, it is changing the lives of citizens caught up in the criminal justice system. It’s making communication easier, and is helping everyone involved build trust and see each other as people rather than cogs in the system.

It has also demonstrably lowered SLC’s re-arrest rates — and is an exquisite example of how designers and user-centered design methods can work across disciplines to create positive, real-world change.

Peterson explained, “Design is an iterative process, no matter the kind of project you’re working on, visual or otherwise. User-centered design begins with understanding the impact your client wants to have — for whom and for where — and that means research to guide what you build; you don’t just pre-define a solution and go start building things. You come up with a number of ideas, and you start small — build the roughest, smallest thing to test an idea. If something works, you add to it, and if it doesn’t, you’ve learned that it doesn’t as quickly and cheaply as you can. When you deliver a solution, you have more assurance that it’s what the user will need and want.”

Going into project, Peterson and his partner had a clear goal: leverage technology and design to lower the rate at which citizens fail to appear in court or for supervision and treatment appointments, and lower SLC’s rate of recidivism, which was 10 percent in 2014. To understand how to best do that, they had to dig deep by researching the current experience of everyone involved within the system.

They started by interviewing people under pretrial supervision and on probation, criminal justice service staff and even the homeless in downtown Salt Lake City. Workshops helped to identify root causes of problems and to re-map organizational systems and relationships.

“I was the primary user researcher,” Peterson explained. “I developed a plan and listed the things we wanted to learn about in order to inform what we would build. I created questionnaires, ran workshops, and from there, I used my design skills to create visuals that people could use as shared talking points when we followed up.”

Using that research, they began building and testing a variety of tools, with Butts engineering the systems while Peterson designed the user experience. ClientComm wasn’t their first solution; but when testing what Peterson calls a “low fidelity” version of the system that allowed case managers to fill out an online form to send a text message, the feedback was so positive that they knew they were on to something.

As Pat Kimball, director of the pretrial probation department, noted, “We had difficulty getting hold of some people. They don’t have voice mail set up or answer their phones. Or they change phones, use their relatives’ phones. ClientComm gives our case managers another tool. They can type something once and text it to multiple numbers. That’s important, because it’s been statistically shown that if you remind people about their court dates, the failure-to-appear rate falls substantially.”

Linda Barry-Porter, one of those case managers, practically gushes when discussing the new tool. “For the 30-and-under set, it’s less threatening to admit a violation of probation by text. Self reported violations jumped by three quarters. When clients recognize they made a mistake, we can say, ‘You have a consequence, but you’re not going to court over this.’ We can strategize around the situations they face. That allows us to build rapport with clients,” she said. “And it made me more efficient; I wasn’t working a full schedule because of an injury, and ClientComm made handling 60 client cases manageable even if I was coming in 20 hours a week.”

With additional feedback based on user input, Peterson and Butts continued to build upon ClientComm by adding features and refining usability. The results have been dramatic. SLC’s Pretrial Department improved client success from 50% to 82% between March and October 2016. Case managers see time savings greater than five hours per week, time that they can now spend directly serving clients. That’s allowing case managers to develop better relationships with those clients.

“It’s easy for my clients to think ‘I am never going to get to the other side, I’m never going to not be in trouble,’” Barry-Porter said. “But today, I rescheduled an appointment because my client left a quick voicemail knowing I could get right back to him. When a client has struggled to get clean, I can text congratulations, so I’m more positive instead of just seeing them once a month to ask, ‘Have you done this? And this?’ When clients see that we can be flexible, when we have a relationship, they see that the court isn’t out of touch. They start to see that they can succeed. That’s one of the beauties of this system.”

ClientComm has been so successful that after the year-long project ended, Code for America has continued to develop the system for use in other cities.

Peterson, meanwhile, has moved to Boston from San Francisco, where he lived before and during his Code for America fellowship. He’s currently working at the Department of Housing and Urban Development as a user experience researcher, where he will continue to pursue collaborative, user-centered projects.

“Turning to social design wasn’t an overnight thing, but I wanted to collaborate with people,” Peterson said. “More than anything, what I got from my time at MICA was validation that there are multiple ways of designing — and in Baltimore, there’s an openness to collaboration, so I was able to experiment and try out a lot of things. But even when I was a graphic designer who created book covers, I always thought about how the user would interact with what I was making. That’s still at the core of what I do.”