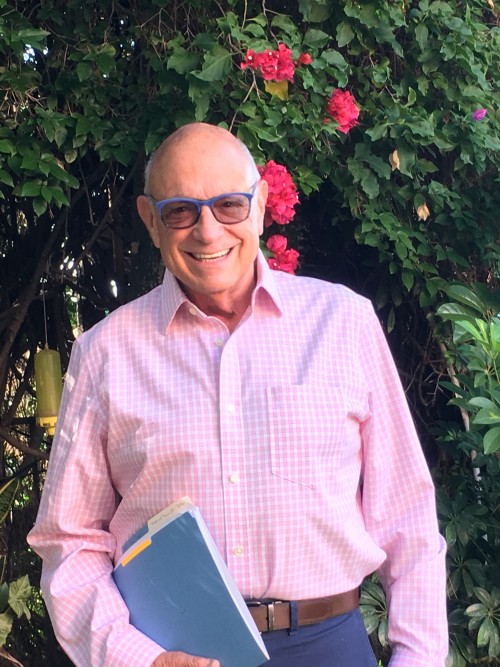 In 2017 he celebrated his 25 years on the Board by retiring; however, his connection to MICA - from which he graduated in 1961 - remains intact through his role as Trustee Emeritus, a position he shares with several others.

Jacobs and his wife Diana, an artist, are members of the MICA Legacy and Cornerstone Societies. Jacobs was born in Baltimore in 1939. During his four years at MICA as a painting major, the lesson he learned best was that he was never going to cut it as a painter; he also learned that the world he was exposed to at MICA was the world he wished to spend his life in. Thankfully, he was a better writer than painter, and after moving to New York in 1961, he wrote professionally about arts-related subjects. In the 60s and 70s, he published ten books - most for young adults - and many articles - most about architecture - for The New York Times Magazine and other periodicals.

In 1976, Jacobs moved to Los Angeles, where he had a successful career in television. Among the many dramatic series, he created and produced were the programs  Knots Landing. After retiring from television in 2000, he turned his attention to teaching screenwriting, producing, and cinema history at USC, AFI, Columbia College Hollywood and Belmont High School; and he continues to write.

In addition to his commitment to his Board membership, Jacobs and his wife Diana sponsored seven full four-year scholarships for talented foreign students. From Turkey, India, Trinidad-and-Tobago, Israel, Russia, Japan, and China, these scholars were radically different from one another but uniformly brilliant; and the very existence of the scholarship helped raise the percentage of foreign students at MICA from minuscule in the 80s to significant today. This, they feel, is their proudest contribution to MICA.

The couple in Los Angeles, have three grown children and two exceptional grand-daughters, pictures of whom have stunned Board members since their birth.