Acrylic, Fabric, Ink, and Paper collage captivatingly interweave to create an exuberant painting. This vivid imagery is that of MICA Alumna, Board Member, and Contemporary Artist Shinique Smith ’92, ’03 (General Fine Arts BFA, Mount Royal School Of Art MFA). since her matriculation as an undergraduate and graduate student at the college, the Baltimore native and upstate New York-based creative has risen to critical success. 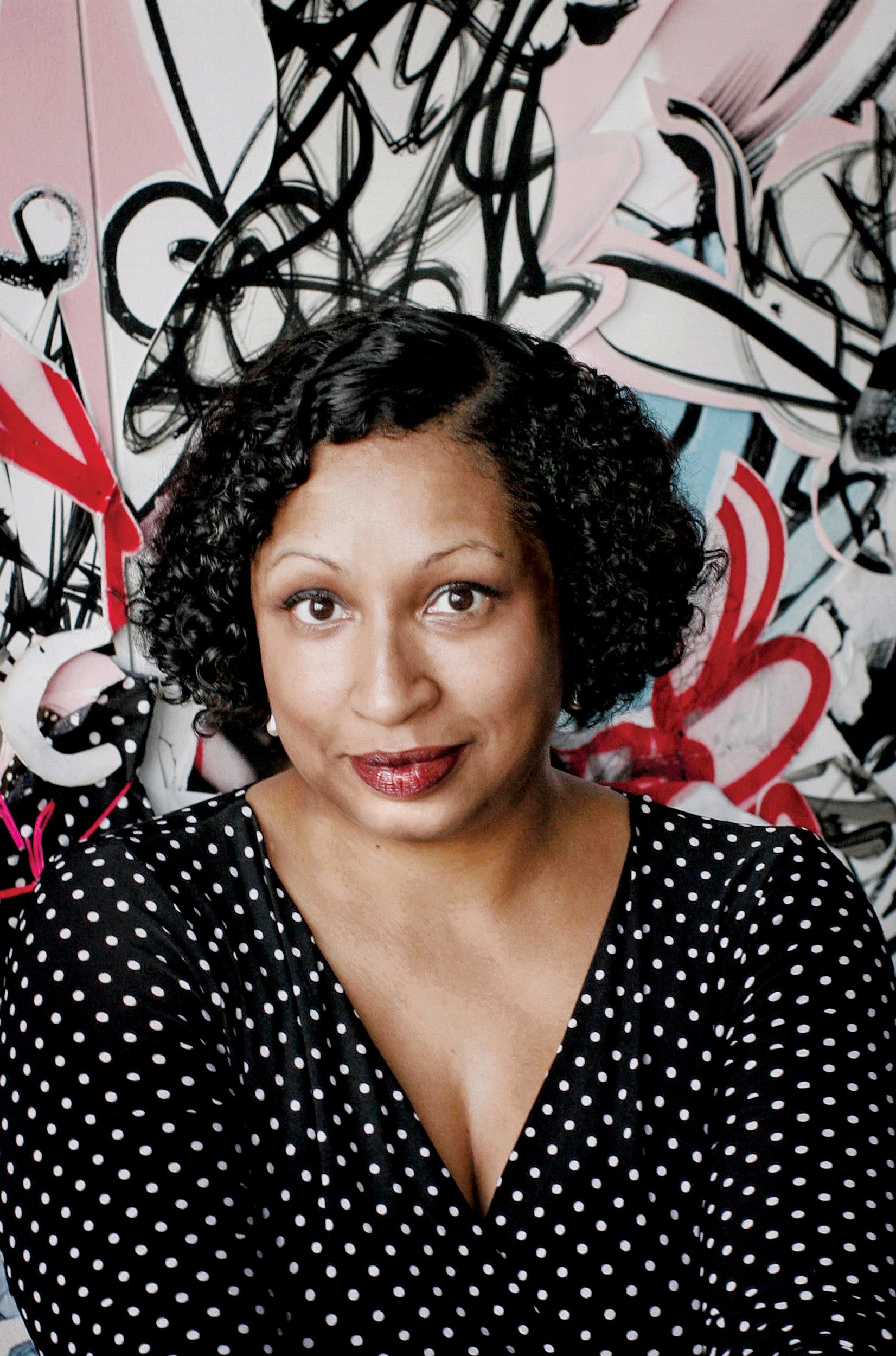 Her paintings, sculptures, videos, and installations are a portrayal of her wide-ranging influences of fashion, dance, graffiti, Japanese calligraphy, and poetry. Smith’s works hang on the gallery walls of the Los Angeles County Museum of Art, Whitney Museum of American Art in New York, and the Museum of Fine Arts, Boston, and have been featured in more than 20 solo exhibitions.

The extension of her artwork has not been restricted to customary spaces; she has created a 140-foot mural at the University of California San Francisco Medical Center at Mission Bay and an outdoor work with 7,000 square feet of mosaic and artist glass for New York’s Metropolitan Transit Authority. She has garnered praise-inline with key names in the arts. She has been the recipient of awards and fellowships from the Louis Comfort Tiffany Foundation, the Joan Mitchell Foundation, and the New York Foundation for the Arts.

Read along as Commotion sets out to learn even more about the artist, the educator, and the woman behind the work.

CO: You attended local Art Institutions Baltimore School for the Arts for high school and MICA for college. How early in life did you discover the value of the arts?

SS: I was introduced to the arts when I was about four years old. My mother always strived to expose me to art and culture in my youth. Then, my mom was taking art classes and was really into fashion. My first contact with art was ballet. I took ballet classes and went to summer camps that had theater and visual arts when I was little.

CO: Growing up in Baltimore, was there an experience while a youth or young adult that influenced your artwork?

SS: There were multiple experiences that influenced me. What pops into mind as far as things that were inspiring to me visually was living in Edmondson Village. Growing up, there used to be this giant mural you could see when driving down Edmondson Avenue towards route 40 of two men playing chess. Seeing that mural regularly was inspiring. On that same route going towards downtown, there was another mural of a man planting a tree that I would see. Also, just making art was impactful. My mom and I used to go to Robert E. Lee park or the Cylburn Arboretum and color and just be out in that bit of nature.

My arts education was equally as important. Getting into the Baltimore School for the Arts was a big deal. Classes that I took there and my foundation courses at MICA gave me a solid core and a classical understanding of making art and art history. When I was at the Baltimore school for the arts, my mom encouraged me to take summer courses at MICA. So between ninth and tenth grade, I took MICA’s portfolio prep with students about to enter college and that was influential. While at the Baltimore School for the Arts, I wrote graffiti with my friends and they are great artists who still inspire me. Those experiences directly influence my work today.

CO: You also attended Trinity school and park school of Baltimore as well as Frederick Douglass high school. Please share your journey from Douglass to MICA.

SS: I finished my high school education at Douglass. When I transferred there, I started mid-year as a junior and the principal, who was amazing, said, “you have enough credits to be a senior if you want to take classes during lunch and on Saturdays.” so I did, and I graduated when I was 16. My friends were still in high school when I began at MICA with a scholarship I earned through Douglass high school.

CO: How important is your environment or surroundings to your paintings, sculptures, videos, and installations?

I am inspired and influenced by everything around me. I live in the country [Upstate New York] and I’m now surrounded by more nature than urban environment. I grew up and I’ve practically lived my whole life in the city and traveled to different countries and cities that have influenced me.

Household objects, past experiences, the human environment, and the spaces we inhabit are part of what inspires me. The spaces that we inhabit, the way we decorate them, how we dress ourselves and move in the world, and how these things might connect visually and conceptually are important to my work. I use objects, such as clothing and fabric, toys, paper, flattened cans, jewelry, stickers, and posters in my work, which are collected from everywhere I go. But that kind of aesthetic did form while I was in Baltimore.

CO: With last April’s unrest in Baltimore, people have wondered about the impact the arts could have on the city. What do you feel is the role of art and artist in public discourse about education and social justice?

SS: Justice is truly required to right years of wrongs and inequities that precipitate unrest. However, art can indeed be powerful and has the potential in general to distill everything that is happening in our society and communicate it to a broad audience to promote a deeper understanding of the world. I think the best art doesn’t preach the truth, but encourages viewers to discover what truth is on their own.

Within education, art is an essential — it’s a bridge to empathy, understanding, and expressing one’s voice. It can bring people, politics, and poetics together. It’s an important vehicle to nurture and empower young people.

In Philadelphia, I have a mural project at a recreation center that I’ve turned into an outdoor performance space. I brought in a spoken word artist to work with the students and they performed the poetry they’d written. I’m expanding the project this summer and bringing in some other artists to work with kids on race, media, citizenship, and truth with the goal of providing a space for them to share their creative voice.

CO: You said you’re inspired by the vast nature of things that we consume and discard. What story does your work tell? Can you explain these reoccurring themes in your work?

SS: My work is not necessarily narrative, but individual works have their own story through the objects that are used and the way that they are put together. Overall, there may be a story of me in each of my pieces because they are so much my hands and thought process, and I choose these things based on associations that I’m seeing. I also have a somewhat romantic notion that we’re all connected through these things and I work on imbuing my work with these ideas. Maybe, for myself as an artist, I’m pursuing this line of thinking and process of working to explore ways of enlightening myself.

CO: What was your undergraduate experience like at MICA?

SS: MICA undergrad for me was about finding myself and what direction I wanted to go with as far as the arts, and laying a foundation for the ability to go in different directions. At MICA, there is a major called general fine arts, which allows you to create your own program. The courses I chose were mostly involved with drawing. But I also took a required 3D course and a painting course.

My most affecting classes were in collage and assemblage, and senior courses where I could explore my own mind and ideas in different material ways, whether it was drawing, painting, or installation. Having the criticism and guidance of senior advisors was important for developing my voice, and I did experiment with installation, fabric, and objects, and I feel like I’ve finally figured out how I realize some of the ideas I had then. The program gave me room to fail and figure things out with guidance and support.

Also in those days, Leslie King-Hammond’s courses were the only courses that engaged with women and African-American art history, which were enlightening, but there was much that I had to search out on my own, too.

CO: After receiving your undergraduate degree at the college, you returned for graduate school. Please share your time in the multidisciplinary Mount Royal School of arts program.

SS: I was away from Baltimore and MICA for 10 years before I came back for grad school, and in between I worked in film production, including on a John Waters and a Barry Levinson film and others around the Baltimore/Washington area before moving to Seattle where I started and ran a black film festival for five years.

When I came back to MICA, I had been working at Walters Art Museum and had just completed a Master of Arts in teaching at Tufts University and the Museum School in Boston, where I taught at a high school for the arts like the one I attended and took courses in development theory. This experience made me realize that I needed to make art my full-time endeavor.

I came back to MICA because of the encouragement of my mentor, Jan Stinchcomb. She was working with the summer MFA program along with Dennis Farber and Timothy App. I began developing my new path in painting and explored different directions under their guidance and got into mount royal with their support.

Mount Royal was a great program where I began relationships with artists and kindred spirits that continue to have a significant and positive role in my life and in my work. I know all the different graduate programs are more interdisciplinary now, but at the time they were just beginning to be more open and mount royal was truly interdisciplinary.

CO: With recent conversations on the value of an Arts Education, how do you define success personally?

SS: I’ve had a long history with MICA from high school to graduate school to now, and I love seeing how the school grows and evolves with the times and the needs of the student body. It’s developing as a focal point in the community, which I’d like to contribute to as well. Instead of just being there, there’s just so much potential to be a positive contributor to Baltimore. I think Fred [Lazarus IV] started that, and Sammy [Hoi] is expanding where that can go.

CO: Art education is important. Does one need to go to school to be an artist?

No. Though, when one does go to art school, you have access to facilities and different ways of making from printmaking to photography to community engagement. I’m still learning from the people that I went to school with. You go forth into the world from graduation with a group of people who know where you started as an artist and support your dream.

I graduated from Mount Royal in 2003, and I can still talk to these people and show them the work I’m doing now, and they know my history and give feedback. It’s hard to get that when you don’t go to school, to develop a community of peers and mentors. So art education is important for that, too.