Profoundly influenced by socio-political narratives during his childhood in Tehran, Iranian native Taha Heydari ’16 (LeRoy E. Hoffberger School of Painting) was already an accomplished painter before coming to MICA in 2014. His work-which challenges media-driven perceptions of reality and the growing hold digital imagery has on society-has shown in London, Amsterdam, Berlin, Antwerp, and New York. In summer 2016, his work will be featured in Maryland Art Place’s Young Blood Artist exhibition as well as in a solo show at Haines Gallery in San Francisco.

We sat down with him recently to discuss his time at Hoffberger, his art, and the differences-and similarities-he has found between Baltimore and Tehran. 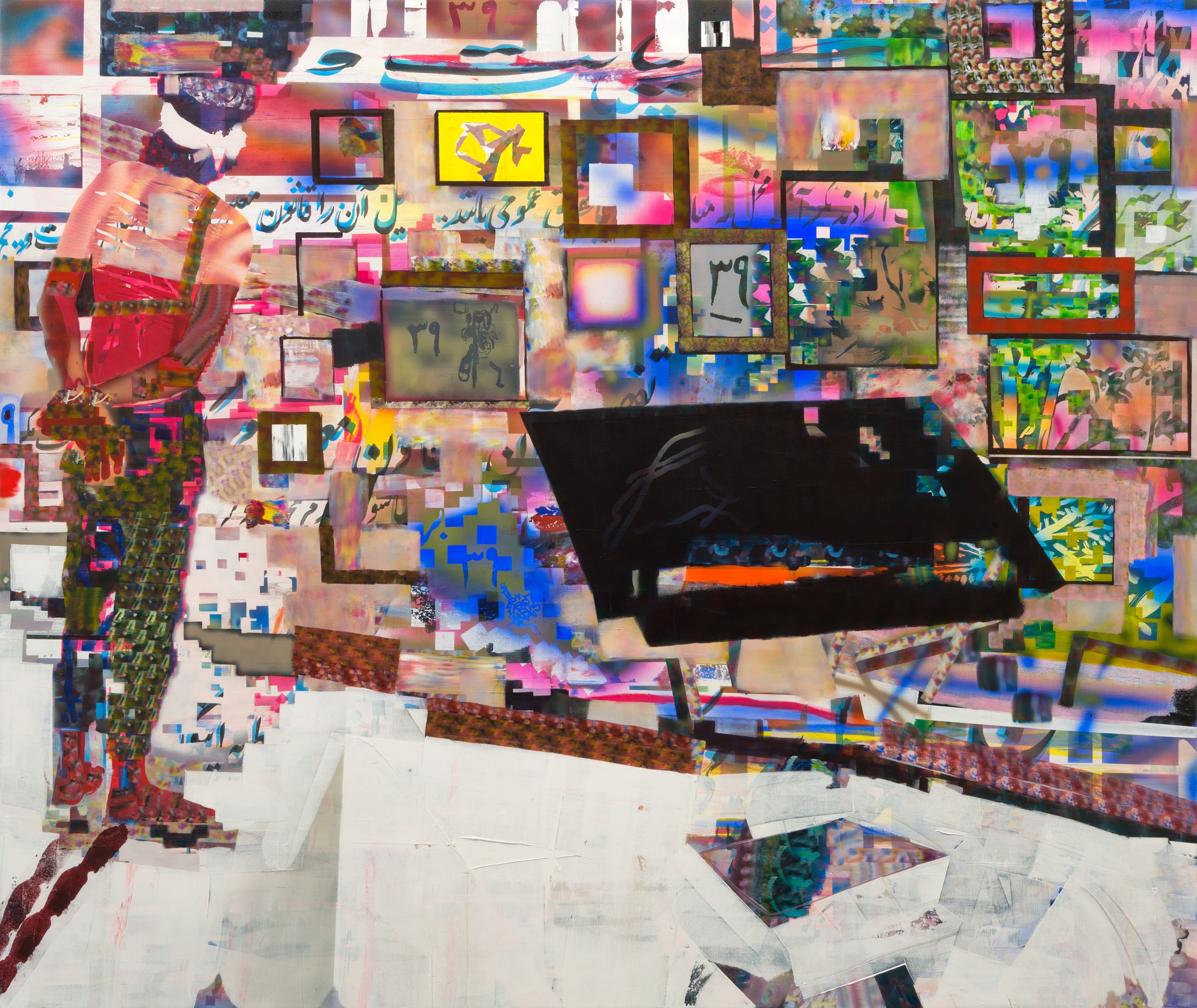 What was it like growing up in Tehran, and was there an experience or person that influenced your interest in art?

I was born in the middle of war between Iran and Iraq, so my everyday experience on TV was news about war, showing soldiers and battlefields, socio-political stuff. That war happened six or seven years after the revolution [that created] the Islamic Republic of Iran, so that topic was very on the stage too. I’ve been really influenced by socio-political subjects since I was a kid.

In terms of formal aspects of art, my dad was really influential. My dad is a painter, so I grew up in painting. The things I used to play with when I was a kid were color pencils, watercolors, papers. I also used to go to college with him. He teaches art, and the experience of being at college and being in art studio classes was influential.

What were your expectations about the United States and Baltimore, and what was the reality once you came here?

People all around the world, the image that they have of the United States is from Hollywood. I was affected by that too. I was looking for that ideal image, in which everything was beautiful, everything was fine; if there was a problem, people were able to solve it-that happy ending quality of Hollywood movies. But when I came here, I realized that image is failed. And this gap between reality and image reaches my concern in artmaking.

Here, I have the privilege of having this window in my studio watching over North Avenue. On that corner is Red Emma’s, and I watch everyday people going by. So now I know what is going on underneath that image that media tries to produce. It is the same in all countries. They try to produce an image of themselves but reality is always something else.

Can you contrast life in Tehran with your experience living and studying in Baltimore?

In Iran, we’re dealing with a metanarrative that’s like a huge conflict between good and evil. The way that part of the world has been, with the origin of all religions-Christianity, Judaism, Islam-the whole area is very hot; I mean, they’re all fighting each other, even if the fight is not clear or obvious, there is an underlying conflict in interactions. Here, the pace of life is very fast, because people need to make money. That lifestyle doesn’t let people here ask a lot of questions.

In terms of history, the United States is new in comparison to the Middle East. In the Middle East, people carry history in themselves. People there, they’re like old trees. They have these roots in history and it’s hard to move. Each movement, each action requires a lot of pain, and blood, and fight. But here, history is not that dominant. 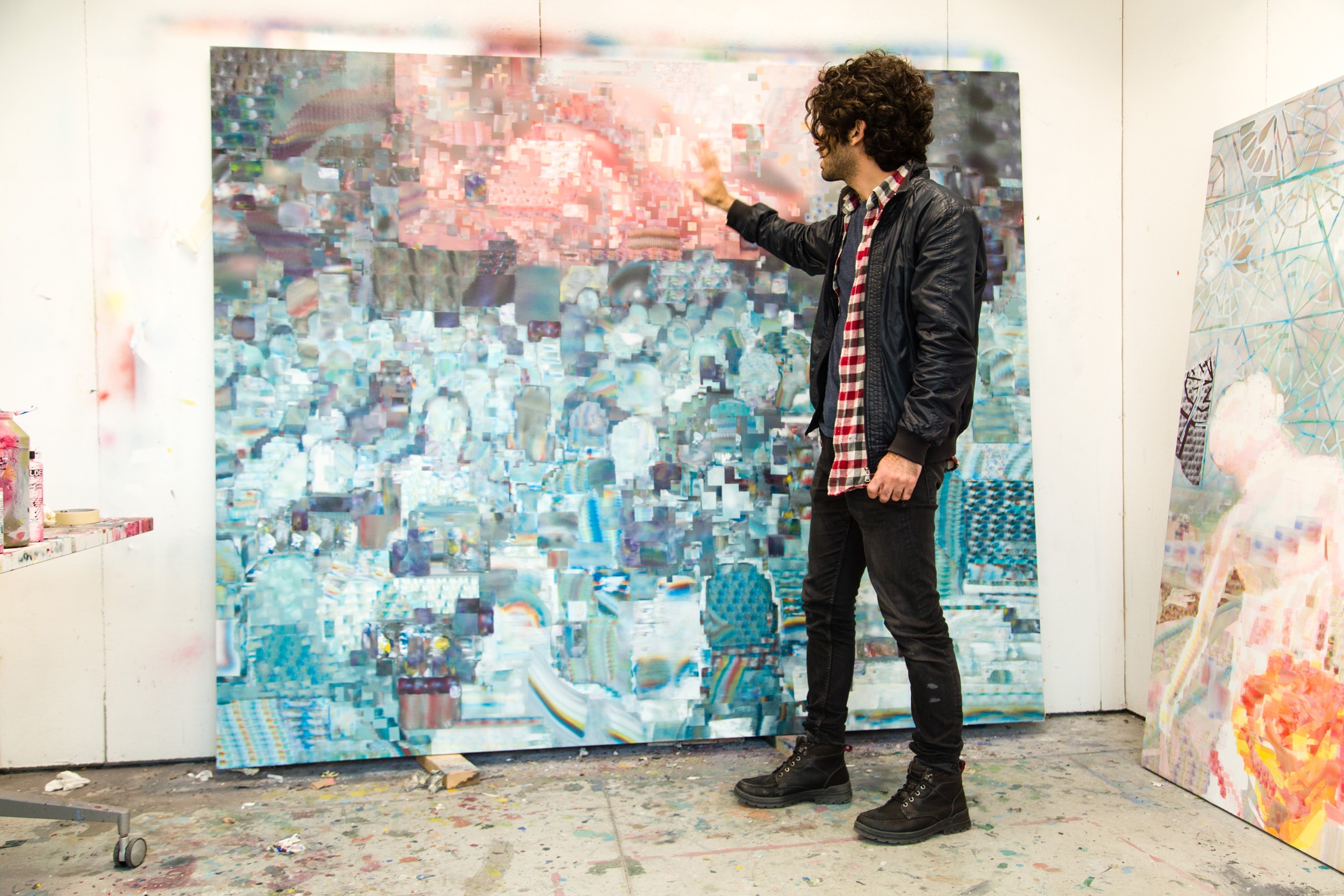 Hoffberger’s program director, Joan Waltemath, makes it a point to bring in a very diverse group of visiting artists. What has it been like interacting with these artists and with Joan?

In this case, Hoffberger is unique too. Every week we have a new artist, and with these artists, we do crits. They’re active artists; some mainstream, some more underground, some using alternative spaces. We have superstars in the art scene visit one day, and then one day we have a very young emerging artist. It gives us this opportunity to have expanded point of views of what is art. That’s a privilege that Hoffberger provides.

And Joan Waltemath is absolutely influential. There are 19 students between second and first year together. Joan is holding this all together.

With 19 first and second year students at a time, Hoffberger is a small program. What kind of environment does that create?

The atmosphere of Hoffberger, it’s like a family. It’s a small program, so we do everything together. We have dinner together; we cook together; we clean together; we live together. For me, that’s important because art is not about institutions, it’s about life. Hoffberger is a program that is alive so that people communicate beyond rules and regulations of institutions.

What do you think international students bring to cultural and social experiences in Baltimore and elsewhere?

The whole idea of diversity and having dialogue is very important. When you come to Iran, when I come here, these interactions let us realize that we are all the same.

We have these borders someone else made for us. When these borders are emphasized, danger is there-like evil exists there. When we walk through these borders, when we talk to each other, evil is not there. When I came here, I thought there was such a thing as Americans, but now I see people. So when we think beyond the borders, we can solve problems. Art lets us do this. Art functions beyond borders.

I try to connect Tehran to Baltimore, the United States to Iran by making art. I want to say, “Forget what the media told you. Let’s talk.” It’s what I try to say here [in the piece Dark Chamber]. It shows a mass of people frozen, looking at one image. They are not looking at each other. We’re all staring at a two dimensional screen that is controlled by someone else. We don’t talk to each other. And I’m criticizing that.

You paint square by square, section by section, as though you are reverse engineering, putting digital work back into painting. How did you arrive at this style, and can you tell us about this technique?

I mostly use rollers and airbrush because I can remove gestures. My work looks like it’s been produced by a machine, and I’m criticizing the process of these machines. I’m making glitches. For example, if your camera falls down, there’s a small chip, the image that you’re taking would be completely glitchy. This is how technology is fragile, and we are holding the whole understanding of ourselves through technology.

This piece, Dark Chamber-the idea of camera obscura, which was the beginning of the camera-it’s like the first time when that pinhole let outside reality come in; we thought, “OK, we can just sit here and watch outside.” All we get from reality is through a screen. We think it’s real, but it’s not. I need to go to the corner by Red Emma’s and stand there for two hours to realize what is real.

What will you take from MICA as an artist?

Diversity is something I really admire about MICA, especially about Hoffberger. We have students from all over; from China, from Mexico, from Korea, and I’m from the Middle East. Even from inside the United States, Hoffberger has students from the south, the west. And when we get together here, we all feel safe. We feel we have support to express ourselves.

MICA provides this stage of not being afraid to talk about everything. For artists, that’s the most important thing. Freedom allows us to show how we can be productive and influential in everything. Artists have new ideas. They think beyond the borders. MICA provides a place to do this.