When you’re a hammer, everything looks like a nail. So goes the popular saying about the propensity of people to over-rely on familiar skillsets.

But when you’re an artist, everything looks like a possibility.

Including vividly hued artwork made without paint. Animal-free wool that vegans would be happy to wear. A restored oyster population in the Chesapeake Bay.

These kinds of possibilities are central to biofabrication courses offered at MICA, where students turn their artistic vision to biotechnology and imagine how the field might progress over the next five to 15 years. So far, the courses have produced an array of intriguing ideas and projects where creative thinking grounded in science has the potential to generate significant change.

Alia Payne ’21 (Interdisciplinary Sculpture B.F.A.), who came to MICA thinking the arts and sciences didn’t mix despite an “intense interest” in both fields, is a skeptic-turned-believer. “I went through high school thinking I wasn’t capable of understanding science,” Payne noted,“because the way it was taught just wasn’t suited to my needs.” But after discovering Introduction to Biofabrication as a sophomore, Payne not only came to understand that art and science actually can work together – they came to firmly believe that a life based in both is not only possible, it is imperative.

“I think it’s essential for art students to have access to this, not only because we live in a world that needs every one of us to do everything we can to preserve it, but also because artists bring a very specific mindset to innovation that I think engineering doesn’t always express,” Payne said. “[Artists] are very creative problem solvers.”

Introduction to Biofabrication, which explores natural growth systems and ways of making — and not just from, but with nature — was created by Ryan Hoover ’06 (Mount Royal School of Art M.F.A.), an artist and interdisciplinary sculpture faculty member. Students in the class have made everything from colorful art in petri dishes using bacteria modified with jellyfish genes to visions of vegan wool made from lab-grown hair follicles in a micro-fluidic device.

THE CREATION OF “BIOCEMENT” SCAFFOLDING  COULD POTENTIALLY HELP RESTORE THE OYSTER POPULATION IN THE CHESAPEAKE BAY.

“The goal is to blend scientific research and artistic exploration into a practice that yields results,” Hoover explained. “It gets [students] toggling back and forth between modes of thinking and working. I don’t expect them to be expert bioengineers, but I want them to understand enough to be conversant and active in that field.” So, what exactly is bio-fabrication?

“We spend the entire semester trying to answer that question,” joked Hoover.In simple terms, it’s designing and building things with biology. And student interest in the field is so high that MICA now offers two other classes: Grow the Future, which typically focuses on the annual Biodesign Challenge, a competition that gives art and design college students a chance to envision future applications of biotechnology; and the 400-level research-based Co-Lab, where students merge digital and biological components toward one common project.

Rachel Rusk ’19 (Fiber B.F.A.) is a Co Lab student who is using her compounded biofabrication knowledge to help create “biocement” scaffolding which could potentially help restore the oyster population in the Chesapeake Bay. Bio-cement is made using bacteria that, under the right conditions, are capable of growing calcium carbonate crystals that can bind together grains of sand into a cement. It is an environmentally friendly material with similarities to oyster shell.

So far, the biocement seems to be working. Preliminary tests show oyster larvae settle on this substrate at a rate that could make it an advantageous material for restoration efforts.

“With science and math, with a lot of these practices that are very analytical and precise, there’s a tendency to lean heavily on one side of the brain, one mode of approaching a problem,” Rusk said. “In the arts, the same holds true but you’re using the other side of the brain ... When you bring people together who have the tendency to learn far away or the other way, you get a myriad of ideas that never would have come together without both sides and both knowledge bases.”

STUDENTS HAVE MADE EVERYTHING FROM COLORFUL ART IN PETRI DISHES USING BACTERIA MODIFIED WITH JELLYFISH GENES TO VISIONS OF VEGAN WOOL MADE FROM LAB-GROWN HAIR FOLLICLES IN A MICROFRUIDIC DEVICE. 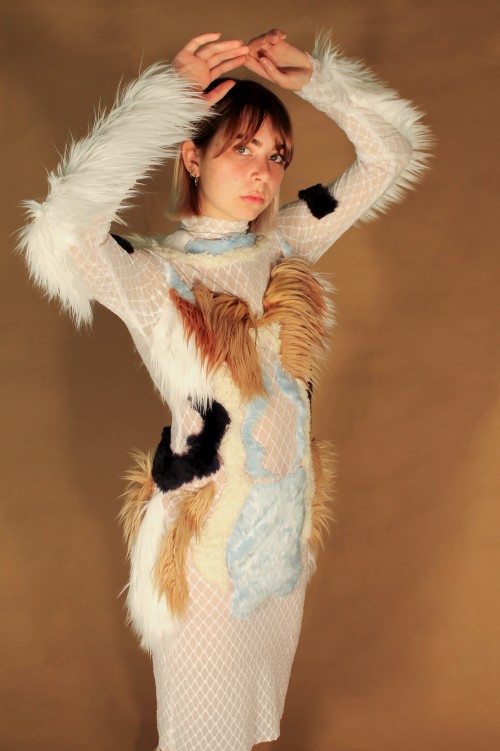 Development of the biofabrication curriculum has paralleled that of another emerging technology Hoover teaches, digital fabrication. Thinking back to the launch of MICA’s Digital Fabrication Studio, he remembered, “It took off like a rocket. In that studio, we have tools such as 3D printers, laser cutters, and computer numeric controlled milling machines (CNC). The mode of working there is taking something designed digitally and fabricating it physically.” As MICA expanded its course offerings in digital fabrication, Hoover taught an advanced special topics course that reflected critically on emerging technologies and took an experimental approach with these new tools. He eventually proposed a very special topic: biotechnology — an area of research that had become central to his own studio practice. The chair of the Interdisciplinary Sculpture department and MICA’s administration embraced this idea, and this course and a new bio lab to support it was piloted.

Around the same time, Hoover attended Biofabricate, a design, biology, and technology conference in New York. While there, he learned about the Biodesign Challenge, also poised to just begin.

“The challenge described what I was planning to teach,” Hoover said. “Teaching art and design students about biotechnology and asking them to imagine what’s possible on a five- to 15-year scale.”

The class launched in spring 2015, and MICA students competed in their first Biodesign Challenge that summer. The success of biodesign coursework since then is evidence of the evolving idea of what it means to be creative — and that artists belong in all spaces, including scientific laboratories.

One of their first projects involved “bioprinting,” where Escherichia coli (E. coli) bacteria was genetically engineered. Payne tweaked the organisms by inserting DNA into them. As a result, the bacteria made a fluorescent protein, visible under an ultraviolet light. The protein reflected back colors, such as red and green.

“We created living ink from a bacteria that reacts to UV light,” Payne recalled. Along with fellow students, Payne then used the “ink” to create art in petri dishes. Using a laser cutter, they made a stencil that resembled an aspen tree forest. Payne then placed the stencil in two petri dishes, sprinkled liquid bacteria over the top, and set the dishes in a heated incubator so they bacteria could grow. Within a day, an ultraviolet light revealed the creations. 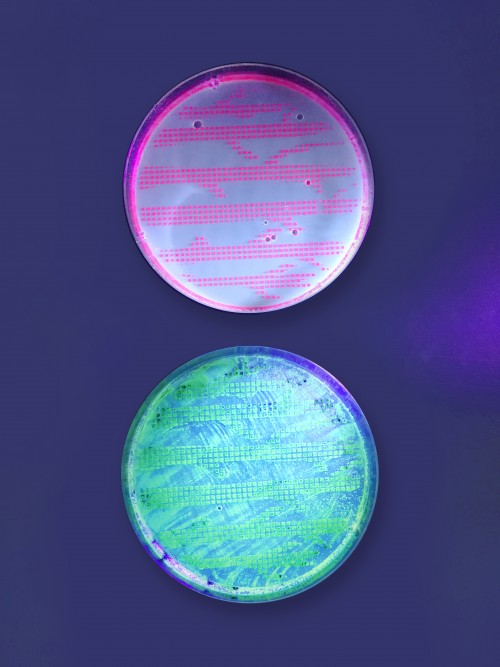 Payne, who is continuing to pursue an art/science path — they are currently a fabrication intern at the Smithsonian National Museum of National History’s Department of Invertebrate Zoology — said of the biofabrication course, “It’s been amazing watching my classmates approaching these labs [in the course] and bringing their own back ground to it. It’s just a new way of looking at problems that are getting increasingly harder to ignore.

In order to understand how biofabrication intersects with artmaking, it’s important to consider three slightly more complicated different approaches to the human relationship with biology and making, according to Ryan Hoover. He recently sat down to discuss the subject with Velocity’s staff to outline these areas:

“We cut down the tree and mill that into lumber and make that into a chair. Or we harvest the cotton and make our clothes from that using living systems. A lot of these substances we’ve bred or farmed in specific ways toward these goals of making. But they’re separate processes. [After] the growing phase, we harvest and then we have the design intention that we exercise through the harvested material.”

“Biomimicry looks at nature for an inspiration. We can look at the honeycomb structure in a beehive and understand it, take inspiration from it, and determine how it functions structurally and how it can be applied and building materials. Or we can look at the surface of a lotus leaf and how it makes water bead, and then apply it to surface coatings for products.”

“Biofabrication brings it all together. The process of making is a process of growing simultaneously. By working directly with a living organism, it’s much more of a collaboration in many ways. The design has to come ahead of biology and growth and then integrate into it.”
About MICA Admission Academics Student Life Events & Exhibitions