During an unprecedented world health pandemic that has shuttered any sense of normalcy, artists and designers are doing what they do best — making.

Through technology like 3D printing, MICA’s artists are using their unique skill sets to bring change.

For weeks, MICA faculty and staff have used every resource they have to help create personal protection equipment (PPE) — namely face shields — through an alignment with Open Works, which was founded in 2016 to rebuild Baltimore’s manufacturing economy.

Throughout the world, healthcare professionals have struggled due to shortages of PPE, from gloves to masks to face shields. Makers have stepped up in an attempt to fill the shortage. But this attempt is one they recognize is a short-term solution for a much larger problem.

Will Holman, executive director at Open Works, said via email he had a call with LifeBridge Health the week of March 16 to assess demand for PPE for healthcare workers. That night, Holman said, he wrote an email out to a group of people in Baltimore that he knew had access to a lot of 3D printers, including MICA’s Ryan Hoover ’06 (Mount Royal School of Art MFA) an artist and interdisciplinary sculpture faculty member.

Early on, Hoover said, he and others in the MICA community began talking about what they could do to help. They talked about the need for ventilators, discussing designs they’d seen for simple versions of the device. But, Hoover said, he recognized these devices are extremely complex, and that attempting to bring in a simple version and adding an unknown devices into an already hectic environment could do more harm than good,

“The need for PPE rose to the top as one area that we could really do the work,” Hoover said.

And while items like  N95 masks are in high demand, they also require very specific materials. Face shields, however, were much more doable, Hoover explained.

“I circulated an open-source face shield design out of the Czech Republic that uses a 3D printed headband combined with a laser-cut visor. The next morning, we put it on Open Works social media, and within three days we were collecting crowd-sourced parts from printers all over the state,” Holman said. “We've now collected about 4,300 parts, plus several hundred of our own prints, and assembled 4,445 shields in our first 10 days of production … We've had about a dozen customers so far, ranging from homeless shelters to large hospital systems.”

About 500 of those parts have come from MICA.

In total, Holman said, over 200 volunteer printers are involved in the Maryland Makers Unite project and that includes school systems, library systems, and other universities.

Hoover has his own shop with 3D printers, as do others at the College.

“I started printing these things the night that I got the email from Will,” Hoover added.

Others at the College were able to bring home MICA 3D printers that are now being used to help print pieces for face shields after getting the go ahead from MICA leaders to use College time and resources. Hoover said by March 21, MICA was fully involved.

And since that time, in addition to the College’s fleet printing as many face shield parts as it can, Hoover has been working on additional equipment to help. 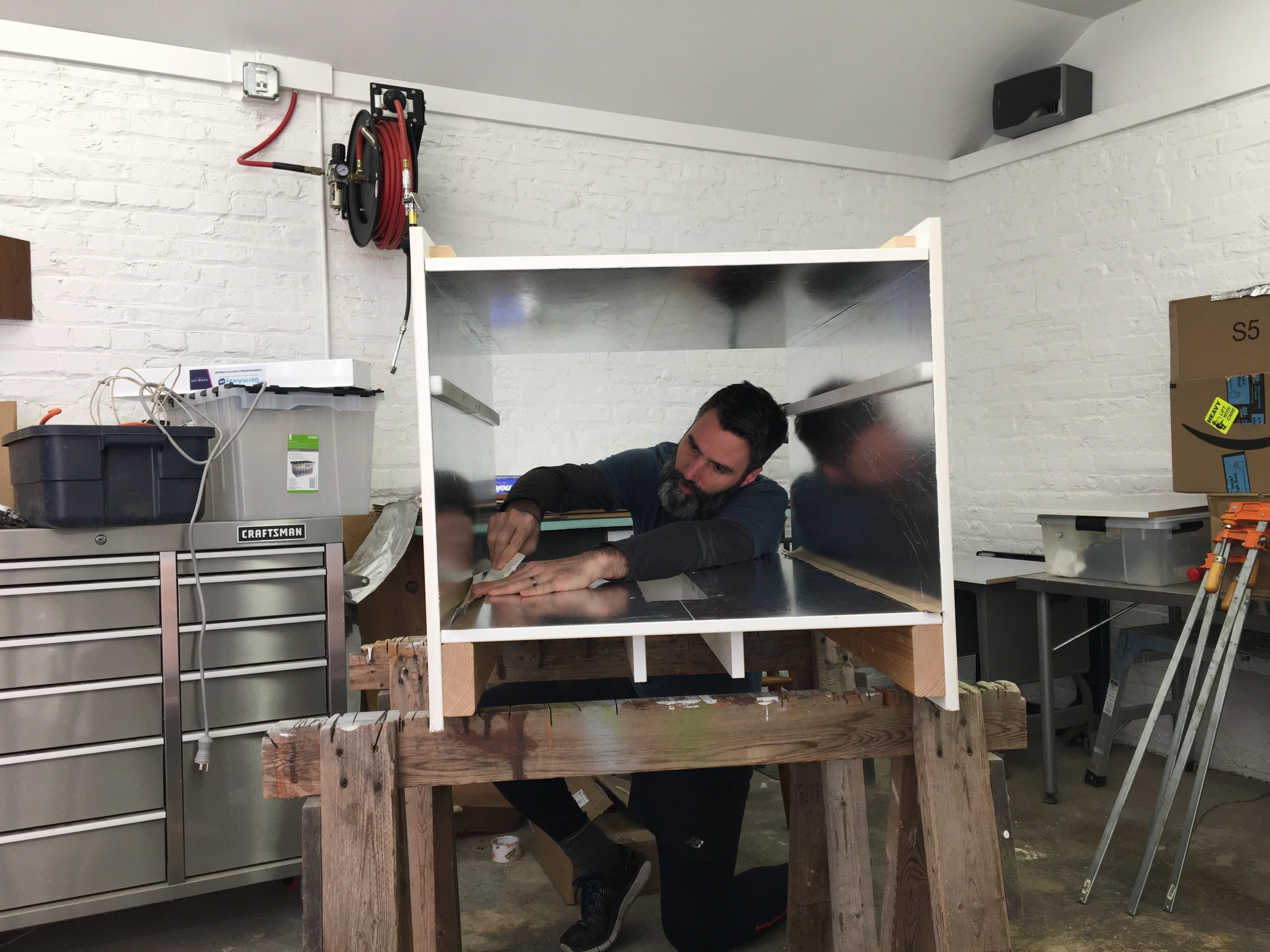 In his studio, Hoover has built a sterilization cabinet, using a UVC light out of MICA’s biomaterials lab, which is effective at killing bacteria and breaking down viruses. The cabinet is lined with reflective aluminum, and allows for Open Works to sterilize incoming parts dropped off in a far more efficient way. Currently, Hoover said, Open Works is sterilizing parts using a liquid method, which takes a great deal of time.

For Hoover, helping create these face shields isn’t a matter of finding a “feel good” project. Everyone involved is already overbooked, he added. But they knew they needed to help, because there is very much a need for items makers can create.

“It’s just obvious. I don’t feel like we’re doing anything heroic here,” Hoover said, “It’s just the only moral thing to do is to support these people who are putting their lives on the line to protect everyone else.”

But, he said, it must be recognized this is only a stopgap measure.

“We really need industry and other folks who have the capacity for high capacity production to be stepping up here,” Hoover added.