Through her social design work on the ground in Baltimore, Smile Indias ’17 makes truth-seeking an art.

A native of the Philippines, Indias exemplifies the role of duty-bound civil servant. She worked in the government of former Philippine President Benigno “Noynoy” Aquino as a graphic designer for almost five years, an experience that made her think about how much more she could do with her design skills to help Filipinos. Inspired, she came halfway around the world in pursuit of an M.A. in Social Design (MASD) degree at MICA. 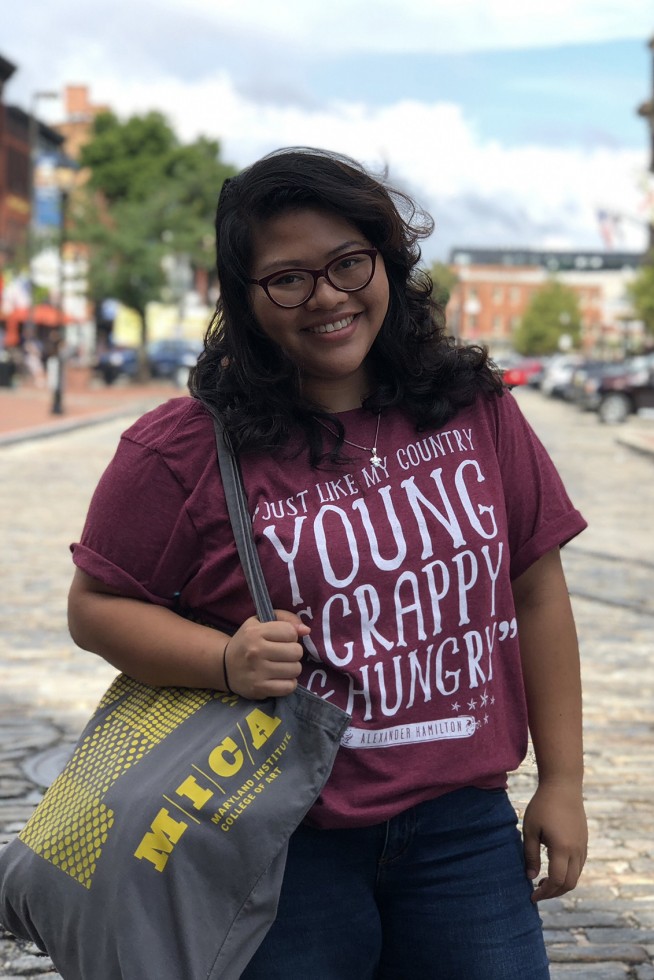 Because the Social Design program is focused on practice-based learning, Indias was expected to collaborate with a partner outside of MICA as part of her thesis project. Choosing to work with government was natural, and she dove headfirst into one of the city’s most challenging and pressing issues — the relationship between the Baltimore City Police Department (BPD) and the city’s communities.

In working with the BPD, her role was to provide officers with spaces to provide feedback on vital department-wide policies that had to be reviewed or written in light the Consent Decree, an agreement between the City of Baltimore and the Department of Justice intended to build community trust while preventing discriminatory police practices. Indias — who is quick to note that much of her work with the department is classified — began by partnering with an officer who, as she said, “was willing to allow me to have conversations with 25 other police officers, mostly centered on Section IV of the Consent Decree.” Section IV focuses on revising policies regarding stops, searches, arrests and voluntary police-community interactions.

Her research — which now focused on designing spaces for officers to give input to policy — now included participating in ride-alongs with officers, sitting in on training classes at the city’s police academy and working alongside the Consent Decree Compliance Unit. Towards the end of the year, she provided the department with suggestions about best practices for implementation of Section IV.

To her surprise, the BPD asked her to stay on and continue her work at the department, a task she was happy to take on.

“I really believe that it’s possible to have transparency and accountability in government,” she said. “I saw first hand how my bosses in the Philippines embodied servant leadership. They pursued policies that would benefit the Filipino people even if it meant going against the church or fighting for peace in Mindanao [an island in the Philippines] even if it was extremely difficult. It was good training ground for all of us who worked there at the time, to see our principals choose what is right at any given turn.”

As of the year 2000, Filipinos comprised 0.3 percent of Baltimore’s population. For many, this kind of isolation could be lonely, but for Indias, it seemed like an opportunity. In fact, she saw her outsider status as beneficial to her cause. In her words, “I am an outsider and I see this as an asset to the project because I can see the perspectives of both sides. I can empathize as a former government employee but also as a member of the community. I am able to identify where potential gaps are in communications which create misaligned expectations between BPD and the community. This is something I always think about when I go and do the work—this is a very black and white narrative, and I’m neither. I’m not even from here, where this is a very black and white, very Baltimore, very American issue.”

Though she enjoyed a sense of comfort in her work being an outsider, it was truly her appreciation of doing design in government that pushed her to work with BPD.

“Even before I got here, I knew that whatever my thesis was going to be it would have to do with a government agency because it’s a comfort zone. I carry certain instincts I learned from working withing government that would make my thesis project more meaningful and efficient like the awareness that whatever was being talked about in the media isn’t always what’s occurring within the agency. [The] truth, accuracy and precision that I learned in government is what propels me to make sure I reflect people’s thoughts and insights from conversations into the process.”

Throughout her year with MASD, Smile attended Baltimore community events that responded to the 2015 Baltimore Uprising. These interactions inspired her thesis project regarding the consent decree, which eventually led to her becoming a T. Rowe Price Fellow as well as Design Strategist to the BPD in 2018.

And in the Social Design program, where students are asked to think critically about how social issues affect communities, that training came in handy. For the last year, Indias has continued her work with BPD with hopes of returning to Manila in the near future.

Asked about what going home means to her, Indias paused before answering. “I think the goals and dreams that my friends and I built are back home. These past two years have been about learning and growing so that anything I bring back home will help make things better for the Philippines.”