Cindy Cheng ’08 ’11 lived all over the world — from Hong Kong to Vancouver to Hawaii to Massachusetts — before making her way to study at MICA. And after earning her Post-Baccalaureate Certificate in Fine Arts and M.F.A. from Mount Royal School of Art, she chose to make her home here, maintaining a spacious studio in Baltimore’s Greektown neighborhood. In 2017, she won the city’s most prestigious artistic honor, the $25,000 Janet & Walter Sondheim Artscape Prize. Strategic Communications recently visited Cheng in her studio to discuss her creative practice, her evolution as an artist and her time at MICA. 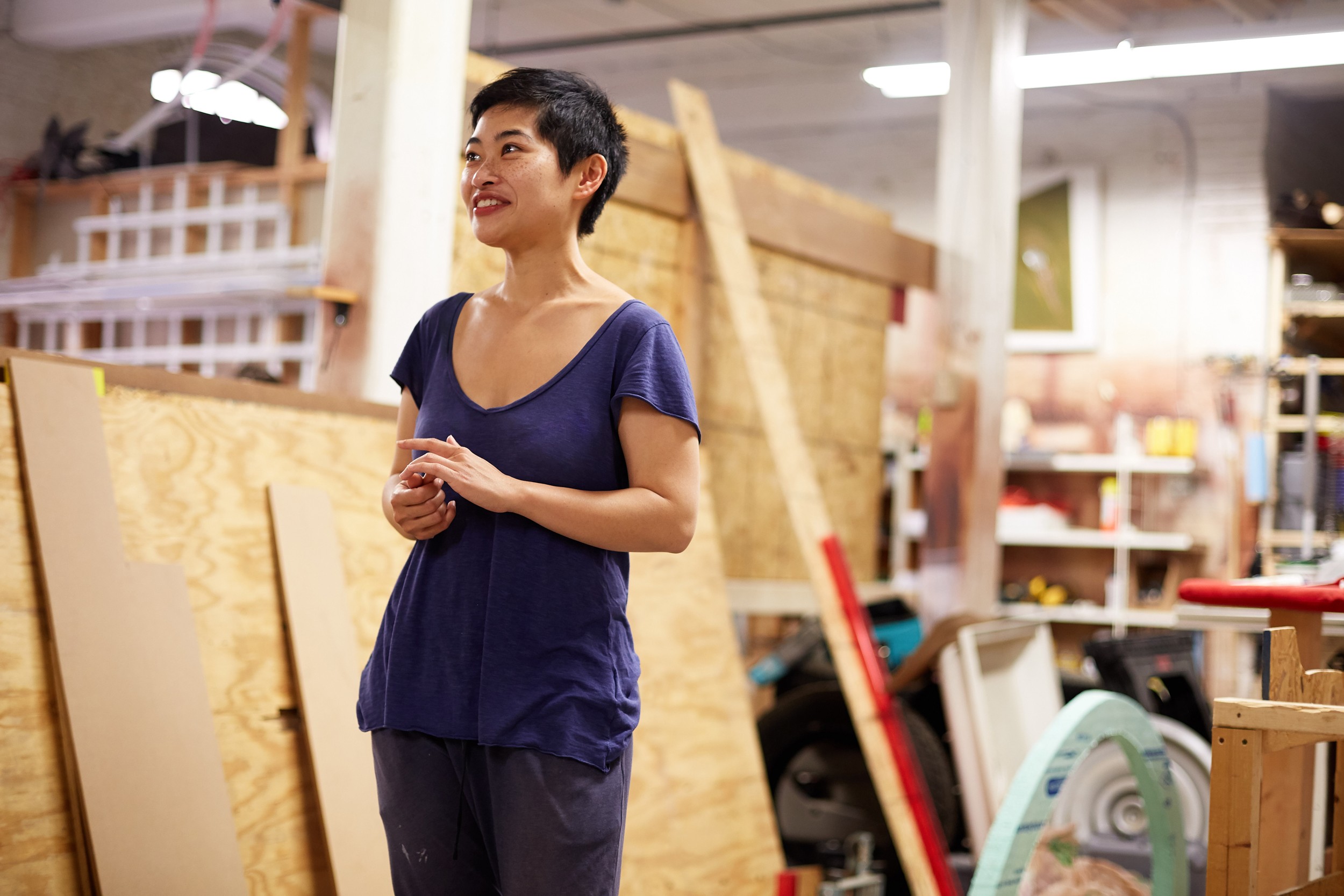 MICA Communications: How did you end up at MICA?

Cindy Cheng: I was working at a gallery in Hong Kong, and I really wondered what it would be like to have an intense studio practice. I was still in touch with faculty from Mount Holyoke, where I went for my undergraduate degree, and they suggested I apply to MICA’s Post-Baccalaureate program. They thought I would fit in and benefit a lot from the program’s structure.

So I applied and got in and came here and never left.

MC: Can you describe your experience in the Post-Bacc program?

CC: Post-Bacc was amazing. It’s a really rigorous, very open community. It attracts people who are at very different points in their life and who want to invest time into creating their own art practice. Everyone was trying to find their way at this fundamental level. It was great.

MC: Why did you decide to apply to graduate school at MICA?

CC: I knew that I wanted to have a studio life after the first couple of months in the Post-Bacc program, and even though I applied to Hoffberger School of Painting as well, I knew Mount Royal was where I wanted to go. Francis Barth [former director of Mount Royal School of Art] had a really long art career, and her experiences really informed how she talked to us about our work and what it means to have a studio practice. She said it’s great to have awards and be recognized for what you do, but what’s really important is what’s going on in the studio. I’ve taken that to heart. If you don’t work, nothing else matters.

MC: Why did you decide to stay in Baltimore after grad school?

CC: Even though my parents live in Hong Kong, on a personal level, I’m much more attached to Baltimore, which is probably why I’ve stuck around for so long.

It’s pretty great to be in Baltimore as an artist, too. You can have this big studio space with an amazing amount of square footage for an affordable price. And this city is supportive of creative individuals in terms of providing not just space but resources. I’m really excited about all of the maker spaces that have been popping up, like the Station North Tool Library next to Open Works. And the fact that they’re so accessible, that’s phenomenal.

MC: How do you connect your past and where you’re from to MICA? Are those connection reflected in your artwork?

CC: I take a lot of references from the spaces I’ve inhabited. I use structures and forms in my work that reference what I’ve seen in Hong Kong. Same thing with Baltimore, same thing with Hawaii. I think the way you inhabit a space and what you take from that forms how you move through the world. That’s an element that has been pretty fundamental in my practice.

MC: Has your practice changed over the years?

CC: When I got to MICA, I was painting and drawing. Post-Bacc faculty exposed me to artists who worked in a similar vein in terms of the ethos of their work but not necessarily the discipline. I realized I could think about my ideas through a variety of media, so I started working more with collage and cut paper.

When I got to Mount Royal, faculty there encouraged me to leave the motions that I was comfortable with. One of the most fertile areas of a practice happens when you are extremely uncomfortable with what you’re doing. They said I needed to experiment with having that process of risk be a part of how I do things.

So I did. It took a long time. It was really hard. There were a lot of tears and a lot of really hard critiques, but I had a breakthrough in Mount Royal when I was trying to prep for my thesis. Alice Aycock came into my studio and she thought my worktable was really interesting. All she wanted to talk about was my worktable and none of my drawings. So I looked at my worktable and asked, “Why can’t this be art?” I started doing dimensional drawings that sort of came off the wall, and that was the start of everything else. That was how the faculty really pushed me along.

MC: Now that you’re a faculty member in MICA’s Drawing Department what do you try to give to your students?

CC: My experience with my faculty was so pivotal to my development as an artist, and it’s still pivotal to the way that I work. I want to create an environment for my students where they can experiment and where they feel they can fail, because if you don’t push yourself, you don’t grow. That’s one of the tenants I have in the classroom.

MC: Is failure an important part of your creative process?

CC: Everything that I do is based around failure. Repetition and practice is important so that you do gain mastery with certain techniques, but I think the crux of practice is pushing your ideas, pushing your skills, pushing your boundaries. I have confidence in my drawing but I still fail there — but that’s more of a problem of image rather than technique. With sculpture, I’m functioning at the edge of my ability and the edge of my understanding of material.

I’m working on pieces for a show in Portland [Or.], and I’m kind of just feeling it out. I just say, “I think this will work. I think this material is ok.” Half the time — more than half the time — it fails. I’ll take that failure, something that happened functionally or aesthetically, and that will be the beginning point of another work that is totally and entirely germinated from that failure. That’s a really integral part of my practice, and because it happens so much, I’ve learned to make it really productive. That’s how you build your expertise.