From its earliest days, MICA has had a connection to doers and makers, to people who believe that artistic creativity is a catalyst for positive change—including creative business ventures with the capacity to drive opportunity and growth in Baltimore and even around the world.

But starting a business is a daunting task, in large part because funding is a key ingredient to the success of such efforts. About one-third of small businesses start with less than $5,000 in seed money according to research by the financial platform Kabbage; and lack of funding can mean failure.

In an effort to help members of the MICA community push past this barrier, and to affirm its belief in the power of the creative economy, the UP/Start Venture Competition was launched in 2016. Since then, UP/Start has helped an array of student- and alumni-founded businesses grow and thrive by providing investment resources of up to $100,000 annually supported by $1.2 million in grants from the Phillip E. and Carole R. Ratcliffe Foundation.

In October 2019, the College announced the creation of the Ratcliffe Center for Creative Entrepreneurship, which furthers MICA's educational mission to  empower students to force creative and purposeful lives and careers.

The center, which is made possible thanks to an additional $5 million gift from the Ratcliffe Foundation, will address the evolving needs in the new creative economy, and build on MICA's commitment to helping creatives develop innovative, socially-conscious businesses. The center will reflect a range of strategies, including curricular, co-curricular and experiential programming, and competition and entrepreneurship showcases.

The fourth annual UP/Start Competition was marked in 2019, and the three ventures that bought home top prizes—including the water bottle of the future, interlocking tile based on new discoveries in math, and comic books that flip the status quo—are a testament to the creative thinking and innovative spirit prevalent among artists and designers at MICA.

Five years ago Kyle Vaughan ’19 (Design Leadership MBA/MA) had and idea for a water bottle—it would be sustainable, reusable, and be able to flip inside out for total cleaning.

With the idea came a company—Greatest Possible Good (GPG)—an organization that doesn't focus on profit and shareholder value. Instead, the company truly focuses on good, and is beholden to people and the planet, Vaughan said. He added that companies such as TOMS have proven that customers will pay for positive impact in addition to good products.

“The ground has been paved, and I think we’re going to take it to the next level,” he said.

Vaughan, along with his partner and former high school classmate, Kenneth Wayman, created the venture that was one of the top two winners during UP/Start’s finale last April, bringing home $35,000 in seed funding.

GPG will focus on one idea at a time, the first being the Saqua water bottle, which is durable, non-leeching, recyclable, and highly insulating. With its winning money from UP/Start, the company will look to rapidly prototype the bottle, getting it ready for production and testing before launching to the first wave of customers.

Vaughn and Wayman plan to build GPG in Baltimore as an employee-owned business run by city residents, and as a way to give back to the community, will provide resources for an indoor farming youth jobs program in Baltimore. The hope is that Saqua will grow over three to five years, reach maturity, and eventually be run by local talent so GPG can partially divest and create a path for other ventures.

The program’s human-centered design focus is truly key, Vaughn said, and is incorporated into GPG’s business model—one he hopes others can emulate.

It’s a more holistic and caring way to run a company, he said.

“You should be taking care of who and what you impact,” Vaughan added.

As students at MICA, neither Anna Zellhother ’18 (Printmaking BFA) nor Dominique Hellgeth ’10 (Ceramics BFA) spent much time pondering the beautiful logic of higher mathematics. But once they began thinking about tile, the duo began to see the art in computation. The possibilities were worthy of a spiraling Fractal.

“It’s our math redemption,” Zellhother says of Greenmount Tile, her new venture with Hellgeth. As an example, she points to a recent, highly algorithmic development in tile: the so-called “15th pentagon,” a precise new shape on a very old scene. “We’re making shapes that have been discovered recently,” she says. “The work we’re creating coincides with math today.”

“We’re celebrating it!” Hellgeth says. “It’s a bit of a math rebirth.” 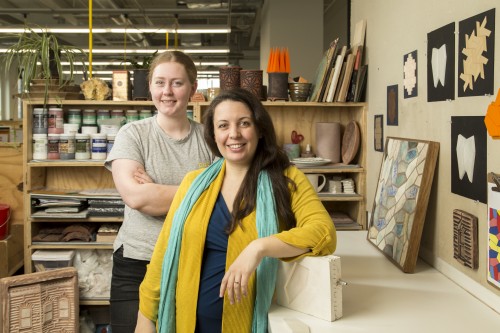 But the duo’s renaissance isn’t limited to a fresh love of figures and functions. They view Greenmount Tile as an excuse to evolve as artists, learning the ins and outs of an industry that’s growing as quickly as its technology. Fine artists at heart, Zellhother and Hellgeth live for growth, and they are as excited to talk about 3D clay printers and interlocking parametric pieces as their business plan. This drive to advance has become a guiding principle for the company. The pair also brought home $35,000 in seed funding during the 2019 UP/Start finale.

“We figured out the process,” Zellhother says of their back-and-forth. “For example, I shared how to produce hundreds of tiles. And Dominique immediately came back with the idea of applicability. It was an exciting question. What could we do with this tile?”

Their discussions lead to a diversified business model, including public and private tessellations, suspended tile, and 3D sculpture. But they also revealed shared values.

“We want to share our enthusiasm for the process and make work that people can live and interact with,” Hellgeth says. A community artist by trade, she says she has started teaching laser centering workshops, while Zellhother continues to teach fabrication at CCBC-Essex. She also notes the company’s name, a reference to the avenue where both artists live and work. “We have a strong community focus,” she says.

Much of that focus relies on expansion. But, powered by their UP/Start winnings, Greenmount Tile has big plans, from new machines and new clients to other, more Baltimore-centric opportunities.

“We plan to be on the books for all the architectural libraries in town,” Zellhother says. “There are any number of grants available to beautify Baltimore, and we’re going to hit the pavement hard. We want to give back.”

Young comic fans around the world learn to draw their favorite superheroes—and an inspired few may even decide to make up heroes of their own. But when RJ Sterling ’19 (Illustration and Teaching MAT) began to draw comics as a kid, he didn’t just invent characters. He launched HILARIOUS COMICS.

“I put all my characters under that name,” Sterling said. “I made issues, black and white. And that began everything.”

By his own admission, those first attempts didn’t exactly break any new ground. “Everyone just looked like me,” he said, laughing. “Just black guys in costumes.” But as Sterling’s interest in comics deepened, so did his take on the superhero genre. “I knew I couldn’t really be Batman or Spiderman. They’re gods. There’s always that disconnect.”

Just as critically, he also began to notice a lack of diversity—and nuance—in the Marvel and D.C. big leagues.

“Even when I read a comic with a female character or a black character, the focus was on them being feminist or black,” he explained. “It made me want to make something where women, queer people, and people of color were just characters, not ‘underrepresented’ characters.”

Boasting an ambitious catalog of titles, HILARIOUS COMICS is Sterling’s attempt to change that status quo.

At HILARIOUS, a “superhero” rarely has powers. Instead, characters rely on resilience to work through struggles. When an alien’s planet is invaded, as in Mordus, the story revolves around a character’s attempts to protect her child; in Away Home, a girl’s hike through a forest becomes a dreamlike bout with deeper fears. And when powers do show up, as in the comic Internal, they act as an elegant metaphor for the protagonist’s bipolar disorder, not an excuse for a fistfight.

“I try to put the emphasis on people and their problems, not what they are,” Sterling said. “I want them to overcome, to become beacons for other people. Why not have characters with autism, or have characters dealing with cancer? These are things we don’t see enough of in comics.”

HILARIOUS COMICS was awarded $20,000 during the 2019 UP/Start finals and was also awarded the $5,000 People’s Choice Award. For Sterling, the venture’s aim is to honor the comics that inspired him to draw, but also redefine the idea of what a superhero can be.

“I love Superman because he’s such a Boy Scout,” he says. “He would still help a cat out of a tree. And I want that for my characters. I want them to inspire the readers in their own lives.”

Seed funding was also awarded to Paint.Team and AMAZING INDUSTRIES.

Paint.Team, founded by Haley Manchon ’18 (Drawing and Graphic Design BFA) along with Kelly Sullivan and Doug Moreland, received $5,000. Paint.Team’s mission is to inspire creativity and collaboration through a web application that allows users to team up and create finished works of art from anywhere in the world.

The Paint.Team app allows users to choose a canvas area by touching the screen, and then to create unique designs using corresponding colors of equal value. They hit’ save,’ and their design flies into the painting. Users add mark by mark together—from anywhere in the world—until the image develops into colorful life before them. The app includes the ability to customize templates and color palettes, invite participants via email or social media, and track user marks and comments.

“The idea is that people can collaborate on the same piece of art from the same room or across the country,” Sullivan said, adding “When people have the opportunity to be part of something larger that turns into a tangible, permanent piece of art, it’s meaningful and it’s fun.”

The gig economy, side hustles, automation: for both job seekers and employers in 2019, the new realities of work can be difficult to navigate. Brett Wallace ’19 (Studio Art MFA) recognizes that the pace of progress has left many feeling out of their depth. And with AMAZING INDUSTRIES—which also received $5,000 during the UP/Start finale—he hopes to demystify the dialogue.

“Like everyone else, I’m in it,” he explained. “The lines between life and work have become blurry. So are the boundaries between art, design, and tech.” By talking about the changes in work life, he hopes to give employees at all rungs of the ladder new ways to understand their lives. “It’s about education and consciousness raising.”

A R&D startup exploring the future of work in the digital age, AMAZING’s scope is markedly diverse—a kind of informational clearinghouse, offering written journalism, documentary films, installation pieces, and workshops. “I think about AMAZING as an early stage arts organization,à Wallace said. “Artists themselves are a part of the whole labor model, I’m talking to people at art institutions who want to know why no one is talking about the future of work. It’s so big! And I see huge potential in talking about it.”