From smoke-filled bars in France, to Baltimore’s back streets and alleys, to the rolling fields north of the city where members of the Elkridge Harford Hunt Club ride to hounds, Tony Shore has always sought to find his place.

As he explained, “My work has always been about my place in and understanding communities and class. My series of fox hunting paintings were about embedding myself into a community that was foreign to my formative experiences growing up in South Baltimore. When I was in Rochefort [as part of MICA’s noted artist residency program in Brittany, France], I would go into places – dive bars – where I didn’t speak French, because I knew the real people were, not the tourists.”

So it was no different these past two summers when the chair of MICA’s undergraduate Painting department traveled to China as part of a cultural exchange program with the Chinese National Academy of Painting. Visiting both Beijing and the Xinjiang Uygur Autonomous Region (XUAR) in the China’s northwest, Shore traveled with artists and faculty from other American painting programs participating in academic panels and exhibiting their work in regional  museums. 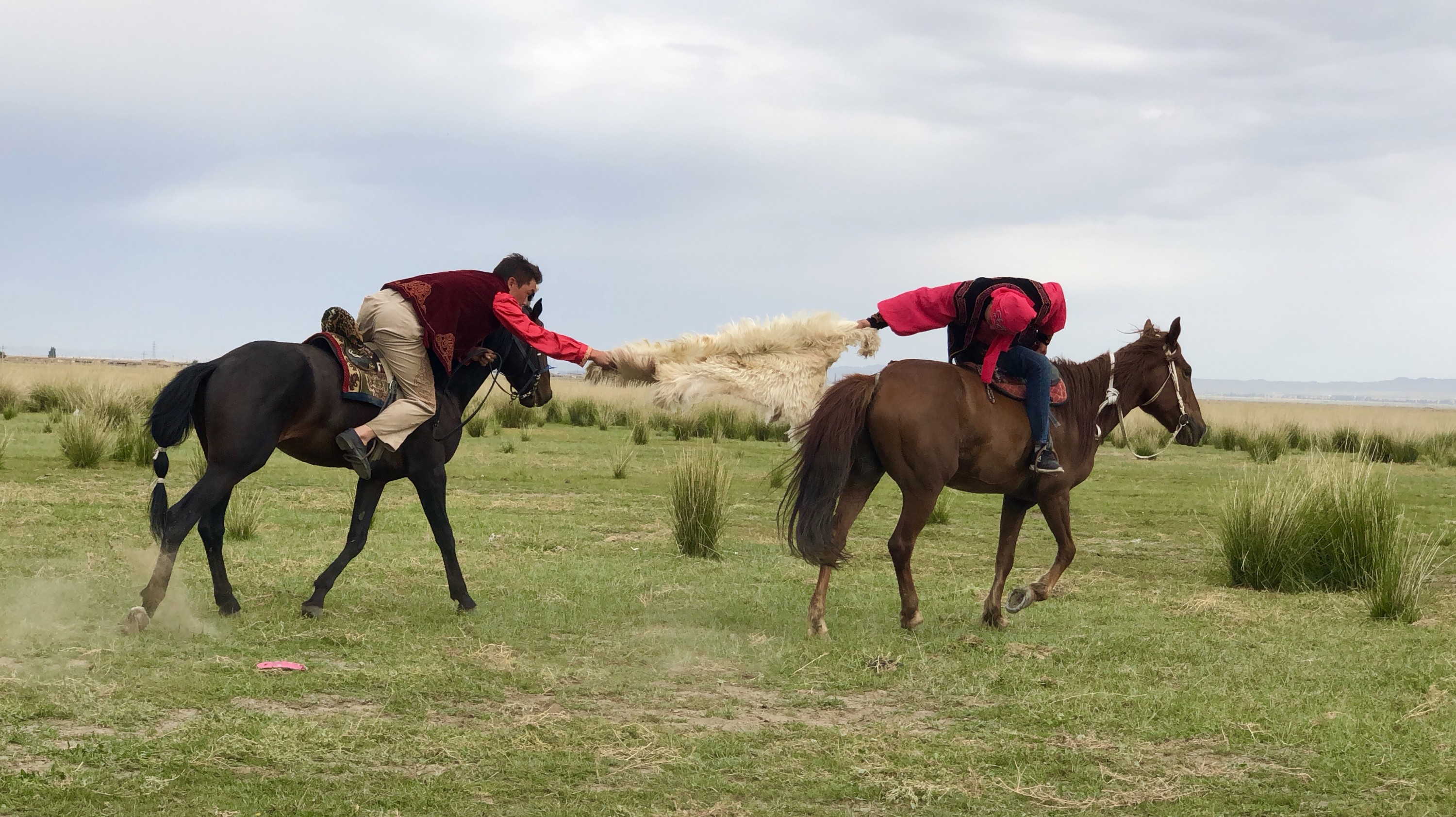 Villagers in the Nalati Grasslands play a game of "keep away" with a sheepskin. Photo courtesy of Tony Shore.

Calling it a bonding experience, Shore said that one leg of the trip across the world’s most populous country – and third largest – took two days by train, with the entourage sleeping four to a room. During the two visits to XUAR, the group visited the Gobi Desert – Shore climbed aboard a glider for a bird’s-eye-view of the magnificent terrain – as well as the rode horses through a village of yurts and held golden eagles in the Nalati Grasslands, one of the four largest of its kind in the world. They visited the Caves of the Thousand Buddhas – over 400 caves carved into a mile-long cliff; built over the course of approximately 1,000 years, beginning in 366 A.D., the caves’ interiors feature soaring, brightly painted murals and massive sculptures of the Buddha and attending devas and boddhisattvas along with yakshas and other mythical creatures.

Yet despite these once-in-a-lifetime experiences, Shore went back to his basics to feed his creative soul.

With the company of a translator, he would go out at night to wander the streets – to get to know the sights and sounds and people in the community.

“I took pictures of things that reminded me of home,” he said. “ Windows and door frames that were lit up the way I think about my paintings. There were people out at night, working at midnight or just closing up shop or resting on the street, and I felt a connection – it reminded me of my mom and her friends in Southwest Baltimore, stoop sitting and gossiping about what was going on in the neighborhood with the hum of police scanners in the background. And people out at night, that remains a part of the culture in China, but its not as safe to do that here anymore.”

Shore translated those scenes from China onto the black velvet-as-canvas he is known for. He gives the medium a distinctive turn, moving it beyond kitsch, mostly because his approach is not only technically masterful, but genuine. His Baltimore-based paintings, for example, depict everyday scenes from family life as well as the harsher realities of life on the street. From card games and neighbors sitting on rowhouse steps to young men fighting in alleyways and a lone black male facing a cadre of police, Shore’s work illustrates the reality of life.

The work his visit to China inspired – velvet paintings of a barber working deep into the night, a food stall worker cleaning up at closing – is no different. 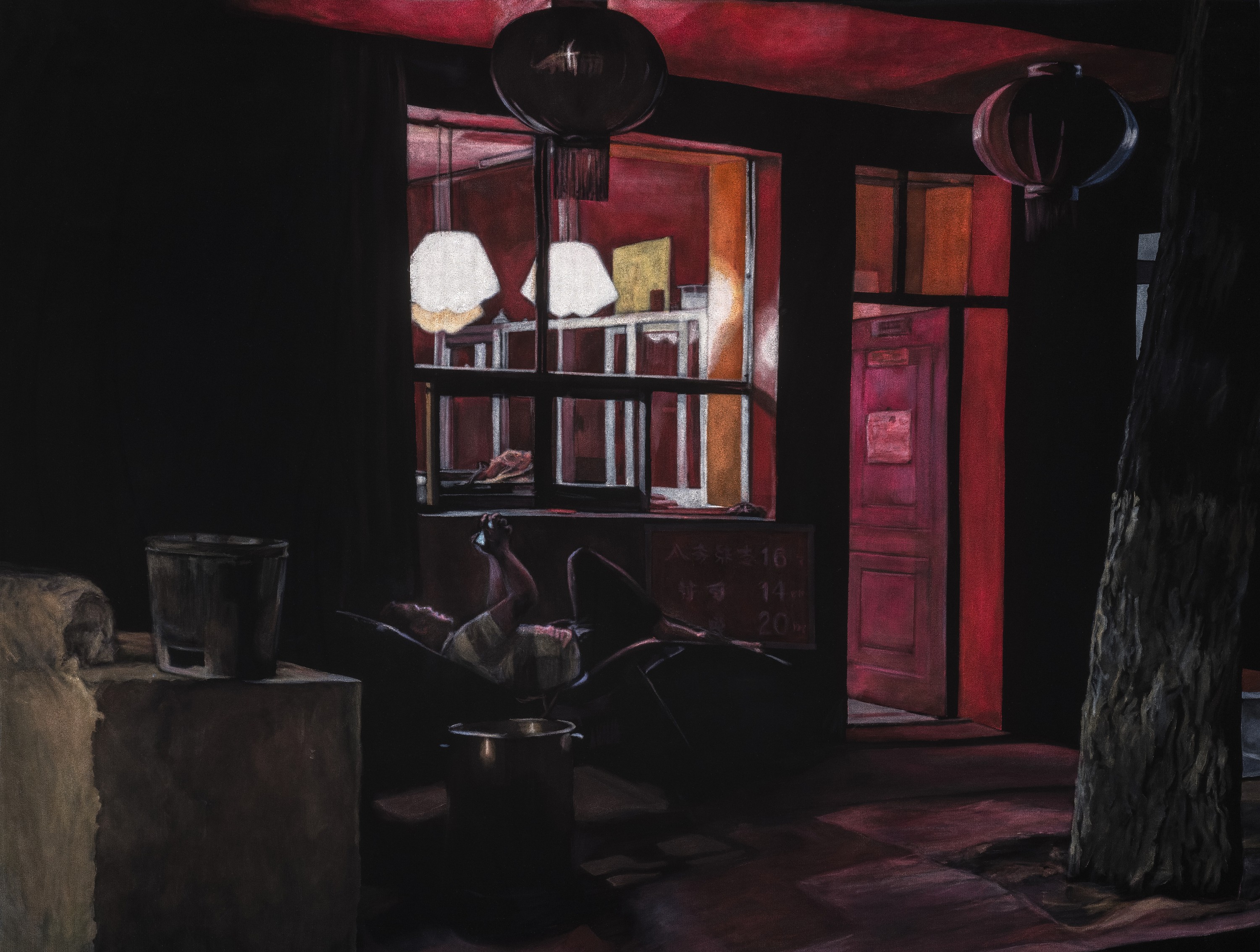 “The Chinese who saw my paintings asked if I lived in China, because I captured the place they knew,” Shore noted. “Because I did the paintings about my family for so long and then the fox hunting paintings…it was about being true to what I saw, and being sincere about things and places that I experienced.”

Shore’s artwork was created between the two trips, and his work and that of the other artists was shown in exhibitions in Beijing and Ürümqi in XUAR this past summer. He noted that both alumni and students at MICA who are Chinese visited the exhibition, and that he was pleased at the reception the work received.

He added, “Looking at those paintings, I was really interested in little signifiers in the scene. If a man was holding a cell phone and the woman cleaning at the end of the night was wearing a little anime character on her apron – they were the time markers that tell you when things happened. Even though the scenes looked timeless, it was in our time and it was true to the community.”